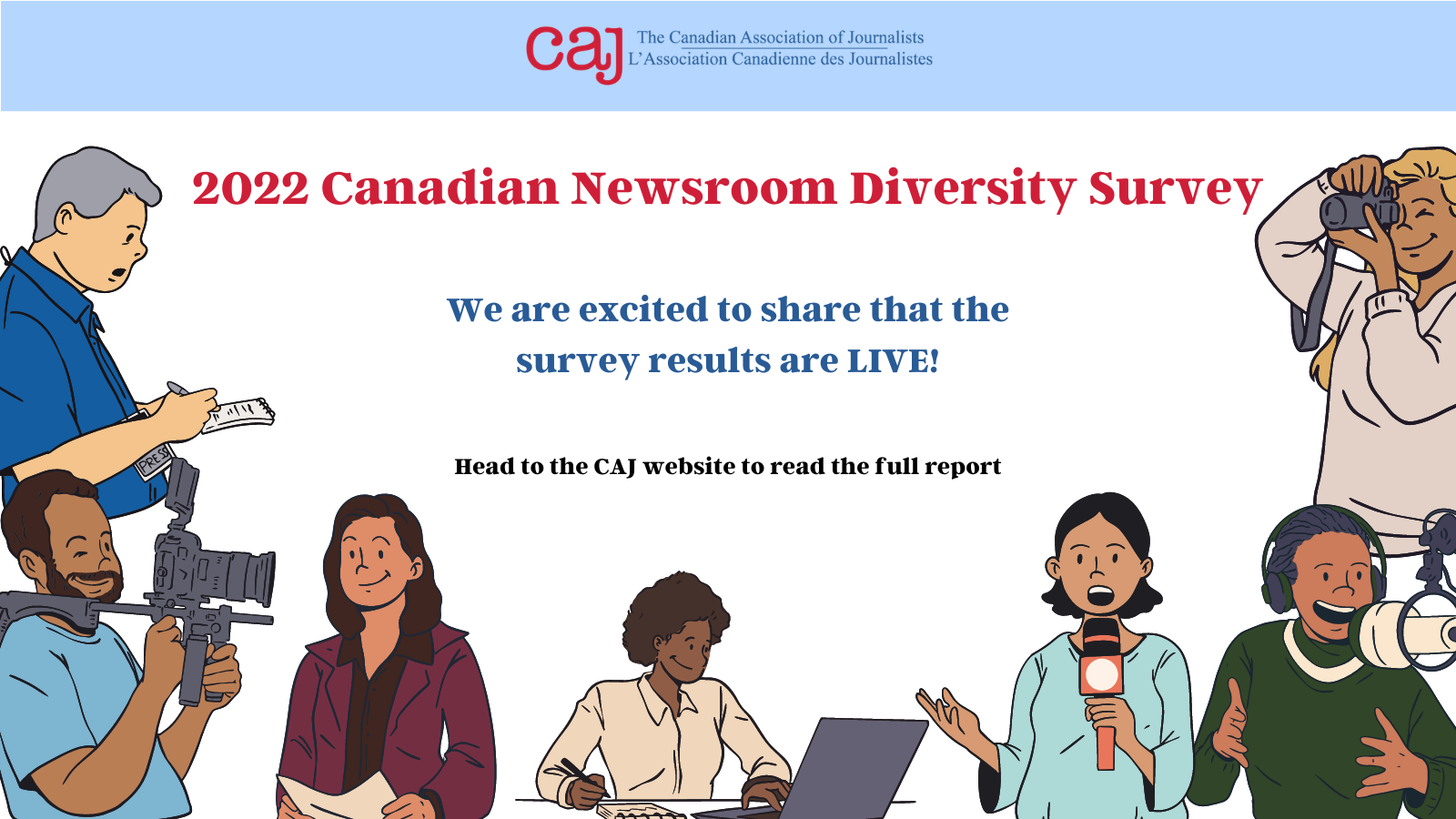 For full results of the 2022 survey, including a link to the final report, head to our interactive visualizations page.

The 2022 survey submissions portal is now closed to newsrooms. We thank all 242 newsrooms who have taken the time to participate this year.

To see a full list of who participated, you can check out our thank you page or view the list in the appendix to the written report.

The survey was sent to the editor-in-chief, or their equivalent, at radio, television, digital, and print outlets across the country.

Why is this information being collected?

There is widespread consensus around the need for Canadian media to reflect the society it serves. But addressing representation, or lack thereof, in the industry requires that we measure the level of diversity in newsrooms across Canada.

In the U.S., the News Leaders Association (NLA) has conducted an annual national diversity survey since 1978. It is past time for Canada to do the same.

How did this survey come together?

The CAJ spent three years consulting with survey design experts, international partners that conduct media diversity surveys in their countries, and Canadian organizations and individuals in Canada that have studied the diversity of our country’s media ecosystem. The NLA, which has conducted a survey in the U.S. since 1978, provided invaluable support in designing this survey.

This annual survey is designed to be easy to fill out. It asks for information that most Canadian media organizations have already collected or that they typically collect during hiring. The information is also easy to collect if it’s not already available.

What did the 2022 diversity survey find?

The 2022 survey included data from 242 newsrooms and 5,012 journalists, making it the largest diversity survey in Canadian media history.

The survey showed that there is a lack of diversity in Canadian media, specifically in supervisor and full-time roles. We learned that 82.9 per cent of supervisors are white, while only 50.6 per cent of interns are white. Overall, women outnumber men by a small amount in newsrooms, but still tend to be over-represented in part-time and intern roles.

We also learned that 77.7 per cent of newsrooms employ no Indigenous or visible minority journalists in their top three newsroom roles.

What other organizations are working with the CAJ on this survey?

This survey is made possible through the support of numerous generous partners including the News Leaders Association and the Fédération professionnelle des journalistes du Québec. The Canadian Race Relations Foundation has generously provided three years of funding to strengthen the administration of the survey; this includes hiring a part-time diversity survey officer who will help increase the number of newsrooms participating. Qlik provided data analysis and visualizations that made the statistics in the 2022 report possible as well as the interactive website.

For the most part, the 2022 survey was the same as last year. A few small additions and changes were made. For example, there were supplementary ‘housekeeping’ questions that asked for the total number of staff for the outlet(s) included in the data as well as the target audience. We also added a question about the gender of supervisors in a top-three leadership role, and an additional field to share any diversity data that newsrooms may collect in other diversity categories (eg. LGBTQ+ identity, disability, language, religion, etc.).

Why is data on class, religion, LGBTQ+ identity, disability and languages spoken being requested in the 2022 survey?

The 2021 survey relied on newsrooms to volunteer whether or not they disclose this type of data in response to an open-ended question. The 2022 survey asked newsrooms to disclose whether they collect this data for each of these categories and to share any data they have collected.

Who was sent this survey?

The survey was sent to the editor-in-chief, or their equivalent, at radio, television, digital, and print outlets across the country. For transparency, a PDF copy of the survey text is publicly available.

How did the CAJ decide which categories to use for the questions on race and gender?

The categories are adapted from a Statistics Canada model. This model is used by many newsrooms which collect data on the race and gender of their employees when hiring.

We have diverged from the Statistics Canada model in instances where the categories are not only incorrect but could generate misleading results. For example, Statistics Canada doesn’t offer “non-binary” as a potential gender category, instead only offering the options “man” and woman”. There are two other changes: 1) The Aboriginal Peoples Television Network advised that the use of the term Aboriginal as categorized by Statistics Canada is outdated and should be changed to Inuit, Metis, First Nations (status or non-status); 2) The Canadian Association of Black Journalists asked that “Haitian” be flagged as an example in the “Black” category not the “Latin” category and that “South and Central American” be changed to “Afro-Latino”.

When were responses due?

As an organization representing working journalists the CAJ knows how busy media workers are. That’s why we gave newsroom leaders over three months to respond. The CAJ asked newsrooms to send in responses by Friday June 24, 2022.

Which data will be made public?

The numbers at the newsroom level will be made public for all outlets that have six or more full-time employees. For example, the number of women on staff compared with the number of men on staff will be disclosed. For outlets with fewer than six full-time employees, a breakdown at the newsroom level will not be disclosed, but data from these outlets will be included in the aggregate results.

Short answer questions will only be disclosed in aggregate, anonymized form for all outlets, regardless of employee number.

Only CAJ staff and select board members will have access to the non-public data. It will not be made public under any circumstances.

No. Many newsrooms already collect this data. For those that do not, the Canadian Human Rights Act states that it is not a discriminatory practice to collect information relating to a prohibited ground of discrimination so long as the information is being collected to combat discrimination.

Who can I contact to ask a question that's not listed here?

If you have further questions, please don’t hesitate to contact us at survey@caj.ca.