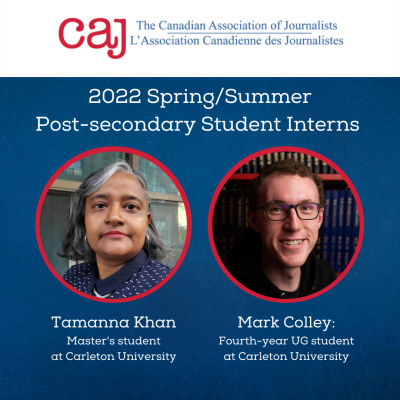 The Canadian Association of Journalists (CAJ) is pleased to welcome Tamanna Khan and Mark Colley to the team. Both will work with the CAJ as post-secondary student interns for the summer semester.

SInce joining the CAJ earlier this month, Khan and Colley have been busy,  helping produce engaging promotional materials for the CAJ’s upcoming national conference and awards gala. After the conference, they will be providing support with the launch of the CAJ’s new and improved website.

Khan  is in her final year of the Master of Journalism program at Carleton University. Prior to starting at Carleton, she  worked as a journalist for more than five years in Bangladesh.

At Carleton, Tamanna has worked as a student reporter for the Capital Current and at the public affairs radio program Midwee. She also covered the most recent  federal election with reporter Mathew Lapierre at the Ottawa Citizen. Khan recently received an award from the  annual Future of Journalism (FJI) Emerging Reporter Fund on Resettlement in Canada.

Colley is a fourth-year undergraduate journalism student, who comes to the CAJ from  Carleton University. A freelance sports reporter based in Ottawa, Colley has worked as news and sports editor at the Charlatan, Carleton’s independent newspaper, for the last two years. In his spare time, he  runs 360bluejaynews on Instagram, which has 32,000 followers, and hosts the Section 138 podcast. He enjoys jogging along the Rideau River and talking endlessly about baseball with his friends. You can find him on Twitter @MarkColley.

The Canadian Association of Journalists is a professional organization with more than 1200 members across Canada. The CAJ’s primary roles are public-interest advocacy work and professional development for its members.